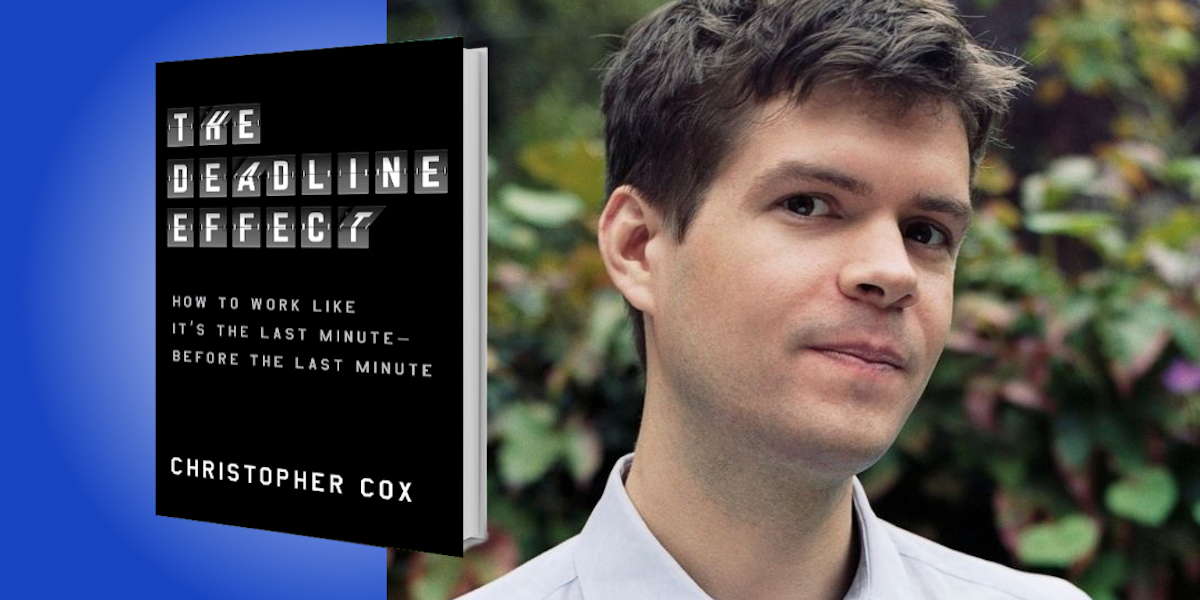 Christopher Cox is a graduate of Harvard and Cambridge. He was a 2020 Knight Science Journalism Fellow at MIT and a visiting scholar at NYU’s Arthur L. Carter Journalism Institute. He was the former chief editor of Harper’s magazine and executive editor of GQ, where he edited—and set deadlines for—stories that won Pulitzer Prizes and National Magazine Awards.

When I tell people I’ve written a book about deadlines, I’m often met with sheepish confessions of various failures: projects abandoned, novels left unfinished, work assignments submitted at the last minute with basic, sloppy errors. These poor souls are not alone: The psychologist George Ainslie called procrastination “the basic impulse,” a human flaw “as fundamental as the shape of time.” It afflicts all of us—and 20 percent of adults consider themselves chronic procrastinators.

I’ve come to think that the first step toward becoming more effective at meeting deadlines is to relinquish the guilt we feel about procrastination. Dwelling on our failures can create a self-perpetuating cycle. Instead, we need to think of ways to keep ourselves on schedule without relying on willpower alone. Thankfully, self-discipline can come not from some overhaul of your psychology, but from establishing external checks on your behavior. Think about how Odysseus overcame the lure of the siren’s song: He didn’t try to resist it on his own; he ordered his sailors to bind him to his ship’s mast.

“The psychologist George Ainslie called procrastination ‘the basic impulse,’ a human flaw ‘as fundamental as the shape of time.’”

2. The worst deadline you can set is “as soon as possible.”

“As soon as possible” sounds awfully urgent, but it tends to deflate any plans you have to get things done quickly. Because it isn’t a concrete deadline, it allows you to let a project slip into the indefinite future. Setting a concrete date and time to finish a project is essential to organizing your time properly. I saw this again and again while researching my book, both in my reporting on the ground—at places like Airbus, the Public Theatre, and Telluride ski resort—and in the extensive academic literature on time management.

One quick example from the academic side of things: Several years ago, the behavioral scientists Amos Tversky and Eldar Shafir conducted a simple experiment. They offered students $5 for filling out a long questionnaire and returning it to them. One group of students had five days to complete the assignment, while another had no deadline. The results were unambiguous: The students with the deadline were more than twice as likely to finish the questionnaire and get the $5.

3. Short deadlines are better than long ones.

Once you’ve embraced the idea of setting a concrete deadline, you need to decide how much time to give yourself. The answer, of course, will vary from project to project, but there’s one vital thing to keep in mind. All else being equal, shorter deadlines are more effective than longer ones. This is a sort of corollary to the “as soon as possible” rule. If you give yourself too much time to get something done, you’re more likely to procrastinate rather than getting right down to work. You might even fail to finish the project altogether.

“If you give yourself too much time to get something done, you’re more likely to procrastinate rather than getting right down to work.”

There was an ingenious experiment that tested this premise. In a paper called “Procrastination of Enjoyable Experiences,” Suzanne Shu and Ayelet Gneezy wrote about what happened when people were given two different deadlines to claim a free slice of cake. One group was given a coupon for the cake that expired in three weeks; the other was given a coupon good for two months. To nearly everyone’s surprise, it was the group with the shorter deadline that ended up eating more slices of free cake—indeed, they were five times more likely to use their coupons before they expired.

Okay, you’ve set a deadline—and maybe you’ve been a bit aggressive with it, hoping to take advantage of the extra power provided by a short deadline. But what if you’re still worried that you might miss your target date? In that case, you should add enforcement mechanisms to your deadlines. Because while it’s true that even self-imposed deadlines are effective motivators, sometimes we need to employ every trick in the book to stop ourselves from procrastinating.

The easiest way to do this is to use what I call a “soft deadline with teeth.” That’s a deadline that you set before your real deadline—but you add teeth to it by bringing other people into the process. So if you have, say, a presentation due at the end of the month, tell a colleague or two that you’d like to preview it for them a week early. That will help ensure you’re ready well before the final due date, and give you time to revise based on their feedback.

“While it’s true that even self-imposed deadlines are effective motivators, sometimes we need to employ every trick in the book to stop ourselves from procrastinating.”

I saw this happen at Telluride ski resort. As much as 20 percent of Telluride’s yearly revenue comes from the week between Christmas and New Year’s. That is, in a sense, the resort’s real deadline. But to make sure that they were operating at full speed by that date, they committed to opening each year at Thanksgiving. That was a soft deadline—there would be only a few skiers on the mountain that day—but it had teeth, because these were real paying customers, and the resort would not want to disappoint them.

For big projects with many moving parts, you will probably need to break up your work into smaller segments. Interim deadlines are a reliable way to ensure steady progress toward your final goal. They also provide an opportunity to stop and assess how things are going, and make changes as necessary. I saw this strategy in action when I spent several weeks with chef Jean-Georges Vongerichten, who has won multiple Michelin stars and operates more than 40 restaurants around the world.

I got to watch as Jean-Georges opened a new restaurant called the Fulton, on the waterfront in Lower Manhattan. In the weeks before opening night, he would stage daily mock services—staff-only meals that steadily grew in size and ambition, starting with just twenty employees, then thirty, then forty. Each time, Jean-Georges and his team got to fine-tune the menu, teach the waitstaff the pronunciation of obscure menu items, and diagnose any bottlenecks in the operation. The goal was to ensure that no diners would have to suffer through the restaurant’s growing pains. And indeed, by the time it opened to the public, everything at the Fulton was running flawlessly.

To listen to the audio version read by Christopher Cox, download the Next Big Idea App today: