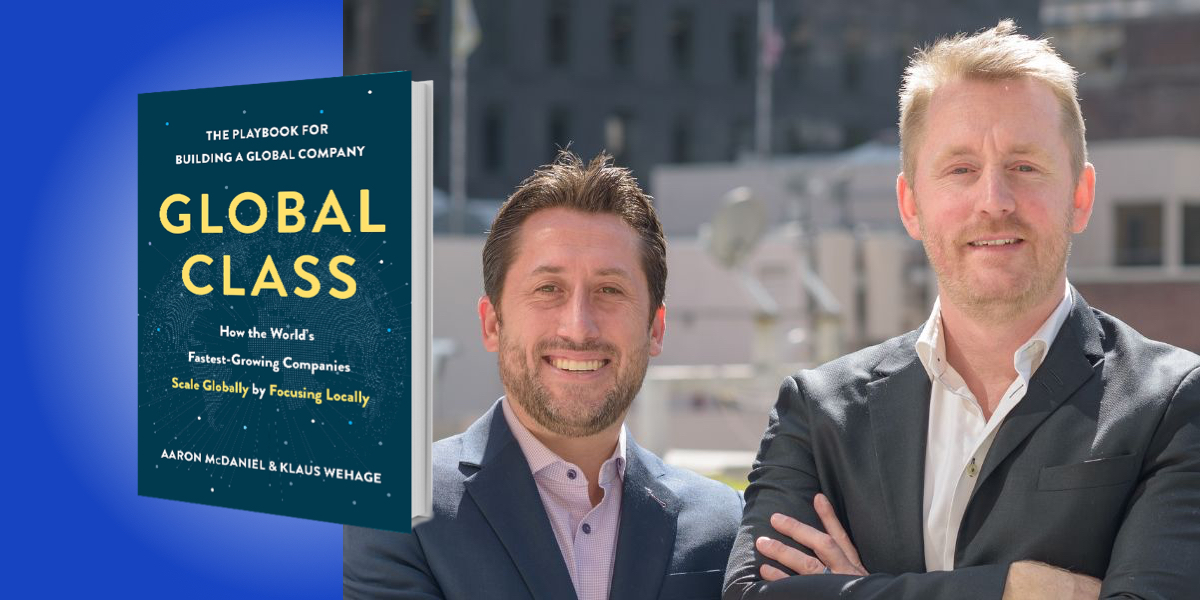 Aaron McDaniel is a professor at UC Berkeley’s Haas School of Business and a serial entrepreneur. He was the youngest Regional Vice President at AT&T and is currently a founder partner at Grow Scale, a commercial real estate private equity firm. Klaus Wehage is a global business builder who has helped over 2,000 entrepreneurs from 50 countries and is formerly the Head of International Relations at Silicon Valley Forum. Aaron and Klaus are co-founders of 10X Innovation Lab, a global innovation consulting firm.

Below, Aaron and Klaus share 5 key insights from their new book, Global Class: How the World’s Fastest-Growing Companies Scale Globally by Focusing Locally. Listen to the audio version—read by Aaron and Klaus themselves—in the Next Big Idea App.

This is tough for successful companies because the “company way” of doing things is what brought them success in their initial market. But stubbornly sticking to the company way invariably leads to failure when growing in new international markets. Companies that adopt a different mindset succeed at reaching a global scale. We call this group of companies The Global Class.

Global Class Companies have a global vision from the beginning. Our research found that the notion of being “born global” isn’t accurate because a business can’t be launched globally from the beginning. However, thinking globally from day one is key. Unlike Legacy Companies that have a home-market bias, Global Class Companies build their product, team, processes, and company culture in ways that can be localized and universalized.

A great example is the world’s largest carpooling platform, BlaBlaCar. Instead of building a business hard-coded for its native France, the company implemented a strategy their founder, Frederic Mazzella, referred to as “Building for Two Markets” in which they considered both French and Spanish markets. They took into account differences in French and Spanish language for their app’s user interface, regulations in each country, and cultural differences. This did not mean launching in two markets at once, but considering multiple markets so that it would be easier to add a third, fourth, or fifth country, and beyond.

The Global Class also sees the role of headquarters changing in today’s post-pandemic times. Instead of being a single building where the company’s power structure sits, people are spread across the globe. While Legacy Companies see HQ as a command-and-control mechanism, Global Class Companies see HQ as an enabler of the localizations required to gain traction in individual international markets and scale across a multinational footprint.

2. The driving force behind the fastest-growing companies are INTERpreneurs™.

Among the different strategies the companies we studied used to scale globally, there was one common ingredient: INTERpreneurs—as in international. We coined this term to refer to people who catalyzed the successful global growth of their companies.

“We believe an interpreneurial mindset will become the most sought-after skillset this coming decade.”

While the backgrounds and paths of these leaders varied, Interpreneurs shared a mindset that made all the difference in achieving global scale. Imagine a three-layered pyramid. First, the foundational layer is an agile mindset—an age-old entrepreneurial mindset. Then, the middle hosts intrapreneurs, meaning entrepreneurs who can navigate the complexities and bureaucracy of an established organization. At the apex of the pyramid, the final layer, are interpreneurs who have a cultural mindset: cultural curiosity, global mindedness, cultural sensitivity, and empathy. We believe an interpreneurial mindset will become the most sought-after skillset this coming decade.

Abe Smith, Head of International at Zoom, is an interpreneur. After a childhood and college on the East Coast of the United States, Abe taught English in a tiny Japanese fishing village. This experience set Abe’s career on a totally new trajectory. He worked at a startup that was one of the first to sell bagels in Japan and was eventually acquired by Quaker Oats. He then took on international business roles for American companies, eventually landing at Zoom where he applies his cultural mindset to the company’s growing global footprint.

Our research introduced us to many others of Abe’s ilk. From Kathryn Hymes (the first international intern at Baidu China who went on to lead international product expansion at Slack) to Troy Malone (who went on a church mission to South Korea and then eventually led international expansion for Evernote and Weebly, among others). Many of these leaders had formative experiences that showed them a world beyond their native countries.

Growing businesses in new markets is often the solitary experience of one person, while the rest of the organization is consumed by the existing footprint. Companies with aspirations of global scale should actively nurture individuals that demonstrate an interpreneurial mindset.

3. The Lean or Agile Methodology doesn’t work in a multinational context.

The Lean or Agile methodology has revolutionized product development, company building, and corporate innovation. The problem is that, in its pure form, it doesn’t work effectively in a multinational context. Pivoting to find the right model in a single market is one thing, but doing so in multiple markets leads to a mess of different operating models.

The key to success in penetrating new markets is localizing, while success at reaching a global scale is managing the inevitable complexity of the localization process. Complexity was often an afterthought for many companies that prioritized speed. Once companies that prioritized speed launched in a few countries, they hit a wall and needed to stall their growth to retroactively build a foundation to support global scale. So, we developed the global agile methodology, a two-step process to help companies balance localization and complexity.

“The key to success in penetrating new markets is localizing, while success at reaching a global scale is managing the inevitable complexity of the localization process.”

In step one, companies use our Business Model Localization Canvas to translate their current model into hypotheses for how the business will operate in the new country. This can then can be tested after taking the company’s current model through two filters: government regulation and culture. For example, many countries legally require that international companies have a local joint venture partnership. Or, one of our favorite stories about how culture affected a company’s strategy in a new market was Docusign’s entry into Japan. A physical signature system is not common in Japan. Instead, a centuries-old system of carved stamps called Hankos is the norm. Rather than insisting on the company’s way of e-signatures, the team at Docusign embraced the cultural significance of the Hanko, partnering with Shachihata (a manufacturer of physical Hanko stamps) to create a digital version. While seemingly counterintuitive, the partnership gave Docusign cultural credibility, which allowed the company to scale rapidly in the market.

Step two involves tracking localizations using a spider-chart framework we call the Localization Premium Analysis. This model has rings that encircle the initial market’s model in the center, illustrating the degree of change needed to succeed in a new market. There is a cost associated with localizing (hence premium) but a company gets the benefit of traction in the market. The framework shows a 6-pointed web, the top three being go-to-market-related localizations (Marketing, Sales, and Product Premiums), and the bottom three being operational localizations (Infrastructure, Administrative, and Organizational Premiums).

This new agile approach can, as Eric Ries aptly said, save companies millions of dollars and hours by avoiding common mistakes. Consider the global agile methodology as the next step in the evolution of the important work done by the likes of Steve Blank (The Startup Owner’s Manual), Eric Ries (The Lean Startup), Alex Osterwalder (Strategyzer/Business Model Generation) and Reid Hoffman/Chris Yeh (Blitzscaling) to help companies find product-market fit, innovate, and achieve scale.

4. Autonomy and trust are drivers of global growth and innovation.

One of the most difficult things for HQ to give local offices is autonomy. But a new market requires this freedom to uncover localizations and to adapt the business to meet local nuances. However, as with managing complexity while localizing, this must be balanced.

Autonomy is the lifeblood of local market success, but it can’t be granted in a vacuum. HQ must have a channel to ensure that the company goals and culture are being internalized by local teams, but local teams must also have a conduit to initiate localizations and share best practices with HQ, so that they can be scaled across a multinational footprint. These Feedback Loops are crucial to two-way innovation and lead to the creation of processes that support local market penetration and facilitate global scale.

Effective Feedback Loops are built on trust and transparency between all parties. For example, Rakuten’s co-founder and CEO, Hiroshi Mikitani, holds an asakai (morning meeting) every Monday. In a town hall-like setting, Mikitani-san explains the rationale behind decisions, tying them to core values and reinforcing the company’s culture. The meeting is recorded and then sent to offices across the globe, staggering send-outs based on the start of the work day in each region. Regional teams also conduct their own asakais, sharing amongst each other (and HQ), strengthening feedback loops, and increasing trust within the organization.

5. Global Class Companies have a duty to contribute to the global community.

In addition to building a distributed team and global customer base, Global Class Companies have a responsibility to enable the communities it does business in. Enable, not just with their product or service, but by supporting local ecosystems instead of disrupting them. This can mean supporting relevant community causes, and beyond. As co-founder, chairman, and co-CEO of Salesforce, Mark Benioff, said, “profit and purpose go hand-in-hand, and business can be the greatest platform for change.”

“Aligned values are important for engaging and retaining employees and customers.”

Zoom’s founder and CEO, Eric Yuan, took this to heart by giving millions of students and teachers across the globe free access to its video communications platform during the pandemic when school had to be virtual. Prezi does this by intentionally paying taxes in the countries it operates in instead of attempting to avoid taxes. Salesforce does this through equal pay and diversity initiatives. Colombian online education platform, Platzi, does this by teaching professional skills to over 3 million people across Latin America, supercharging a growing middle class. Aligned values are important for engaging and retaining employees and customers.

Our final note is on the seemingly simple, but profound, omission of the word foreign in the hundreds of hours of interviews we’ve conducted. The word foreign is riddled with negative baggage. It precipitates misunderstanding; screams of differences; exudes complexity, and smells of fear and doubt. Instead, interpreneurs and Global Class Company builders led us to a clear conclusion: If you seek first to learn and understand, nothing will ever be foreign.

To listen to the audio version read by authors Aaron McDaniel and Klaus Wehage, download the Next Big Idea App today: