How to Break Up with Your Friends: Finding Meaning, Connection, and Boundaries in Modern Friendships 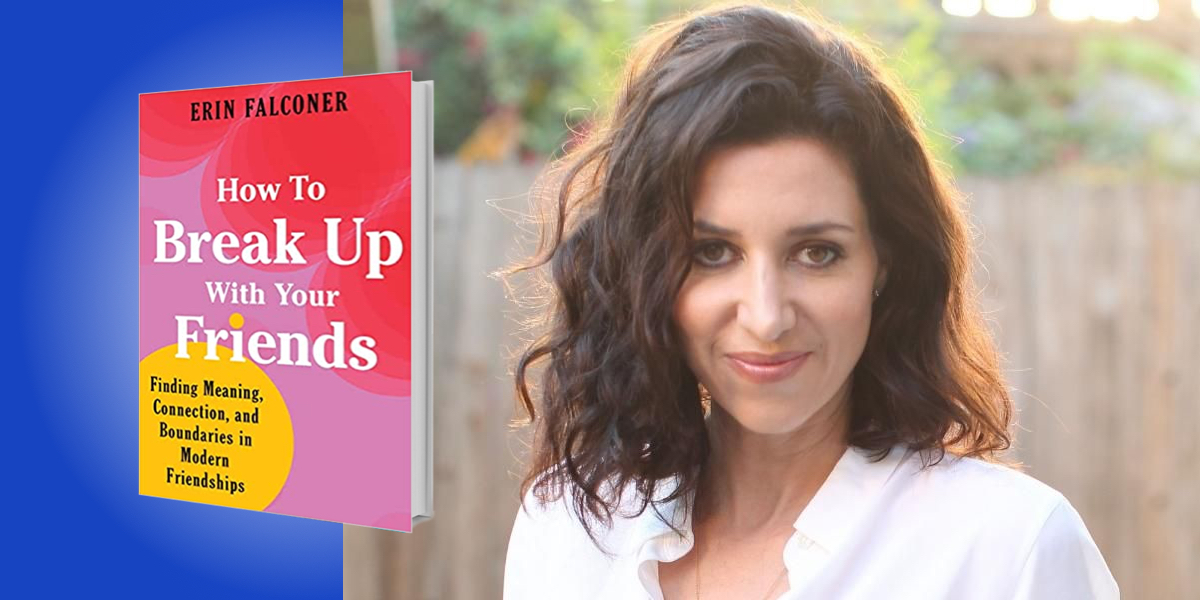 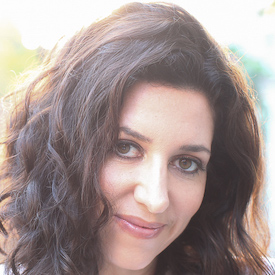 Erin Falconer is an associate psychotherapist and digital entrepreneur. She is editor in chief and co-owner of Pick the Brain, as well as co-host of Pick the Brain podcast. Her latest book explores the importance, especially for women, to reject mediocrity in friendships by mindfully elevating our relationship with others, and with ourselves.

Below, Erin shares 5 key insights from her new book, How to Break Up with Your Friends: Finding Meaning, Connection, and Boundaries in Modern Friendships. Listen to the audio version—read by Erin herself—in the Next Big Idea App.

1. You are here to make friends—solid, important friendships that make you more sound, both physically and psychologically.

In a 2016 review of several studies, Yang Claire Yang, a sociologist at the University of North Carolina at Chapel Hill, found that the higher degree of social integration a person had, the lower the risk of negative health outcomes.

A late 1990s study conducted by Sheldon Cohen looked at the effect that a large and diverse social circle had on the chances of a person catching a cold. More than 200 healthy people were given a dose of rhinovirus, and the larger and more diverse a person’s social network, the less susceptible they were.

A large-scale Swedish study found that people with the fewest social connections were at a 50 percent increased risk of dying from cardiovascular disease. And should you get heart disease, friends help with recovery. In a study by the Journal of the American Heart Association, patients with solid social support had better outcomes as well as fewer symptoms of depression.

Vivek Murthy, the Surgeon General in Joe Biden’s administration, recently published Together: The Healing Power of Human Connection in a Sometimes Lonely World. He wants us to look at loneliness the same way we do hunger or thirst; it’s a helpful sign that we need to address a problem. He writes, “The body’s response to loneliness can be very helpful in the short term. But when those stress states become chronic, they begin destroying the body.” And the effects can be as negative as those of obesity or smoking.

Finally, neuroscientist Emily Rogalski studies super-agers—individuals who are over 80 but function as if they were in their 40s—and suggests that having a tight-knit, meaningful social network can help you live longer. This cohort of super-agers remains physically, intellectually, and socially active. Her work supports the idea that strong social connections protect the brain later in life. “Different neurotransmitters are released when we feel compassion, empathy, love, and friendship,” says Rogalski. Many of the participants in Rogalski’s study report having warm and trusted friendships.

“Just as a healthy diet and exercise recommendations are common practice for doctors, it’s likely they will soon prescribe socializing.”

The importance of friendships to health is so great that many doctors and scientists are beginning to look at it from a public health lens. Just as a healthy diet and exercise recommendations are common practice for doctors, it’s likely they will soon prescribe socializing.

2. Friends help co-create who we are.

The health benefits of friendship are incredible, but its true power lies in how good friends help us discover who we really are. Experts, as far back as the 18th century astronomer Maria Mitchell, explored the idea that we could “co-create each other and recreate ourselves in our friendship.” When you work to fortify your friendships and develop close, nuanced relationships, you are also simultaneously building your own personal strength and character.

Aristotle, arguably one of the greatest thinkers of all time, talked often about the power of friendship, specifically as it pertained to the self. In Answers for Aristotle: How Science and Philosophy Can Lead Us to a More Meaningful Life, Massimo Pigliucci discusses Aristotle’s belief that “friends hold a mirror up to each other; through that mirror they can see each other in ways that would not otherwise be accessible to them, and it is this mirroring that helps them improve themselves as persons.” It is imperative, for those seeking the best versions of themselves, to dive into friendship as a means of self-exploration, awareness, and potential.

3. You should be your own best friend.

Knowing yourself is a necessary starting place for great friendships. In fact, you need to learn how to become your own best friend. In doing so, you will unlock the superpower of giving and receiving true friendship.

Before you can make clear-eyed choices about the people you share time and intimacy with, you have to know yourself. How can you possibly know which friendships should be cultivated and which can be allowed to fade away without knowing your values, needs, strengths, weaknesses, and goals? Making reactive choices in friendships means you might end up with people who don’t support you, don’t respect you, and worst of all, don’t really see you—and vice versa.

I checked in with my good friend Jessie De Lowe, a manifestation expert and cofounder of the How You Glow blog, about the importance of caring for and understanding yourself. She has spent the better part of her career exploring how to unlock deeper parts of the self with her clients, and she shared these wise words, which really resonated with me:

“Your relationship with yourself sets the tone for every other relationship in your life. We act as a mirror for one another, so if you are someone who often judges yourself, you are more likely to judge others, as well as perceive judgement directed at you from others. Negative feelings about oneself and a lack of self-love interfere with one’s ability to truly show up and be present in your relationships. When we make nurturing ourselves a priority and feel like our own cup is full, we have so much more to give, and in turn, can so much more freely receive. This balanced exchange of energy sets the tone for a healthy relationship.”

Childhood is a strange and dramatic time. What happens in our early years has an enormous impact on the rest of our lives, from our childhood economic status to how we were parented to what our school experience was like. Right up there in the influence game are our childhood friendships. Those friendships came with inside jokes, shared secrets, common foes, and feelings that aren’t romance but do include love. Just as early family relationships set our standards for future partners and children, early friendships establish our expectations for future friendships.

Yet childhood is the time when we have the least control and say over how that looks. Early friendships help us learn sharing, empathy, and collaboration, but they can also teach us envy, manipulation, and bullying. When kids are young, their friendships almost entirely spring up from the peer group to which they have proximity: schoolmates, neighbors, and/or family friends. There’s a strong cultural norm to expect kids of the same age to get along. This makes childhood a time of great learning, but also one that can be rife with drama.

What’s more, when you are young, you are still putting together who you are. According to Sandra Aamodt, neuroscientist and co-author of Welcome to Your Child’s Brain, your brain is developing long past the teen years: “The car rental companies got to it first, but neuroscientists have caught up. Brain scans show clearly that the brain is not fully finished developing until about age 25.” If you’re not fully cooked until 25, imagine how impressionable a small child is. Important moments at a young age have the power to transform who you become. Analyzing and understanding early relationships sheds light on how you currently operate within friendships.

“Important moments at a young age have the power to transform who you become.”

It can also be telling to examine the friendship influences you had—specifically, how did your parents model friendship for you? Were your parents really social, and did they go out a lot? Entertain frequently? Were they antisocial? Did your mom have that one best friend, like the sister she never had? Did your dad have a tight crew? All of these things can impact how you view your friendships and your role in them. Look back in order to identify the behavior that resonates with who you are now, versus the behavior that colored you by proximity. Maybe you’ve forced yourself to be comfortable with certain types of socializing because that was programmed into you early, and you never thought to challenge it.

5. The importance of “rupture and repair” in friendships.

For me this is one of the most important concepts in friendship—and one many women run from. Rupture and repair is a classic psychotherapy term, as described by therapist Karen Koenig:

“Rupture and repair is an often-used clinical phrase, which applies to a breach in the therapeutic relationship followed by its restoration and positive continuation. A rupture may be caused by an overt disagreement between therapist and client, a client holding onto negative feelings about something a therapist said or did or didn’t say or didn’t do, or any disturbance in their cordial equilibrium. This dynamic is not something that client and therapist need to avoid. In fact, it’s something they should both welcome as proof of the strength of their connection and bond.”

This idea rings equally true in friendship. If you have a long-standing relationship of any consequence with someone, conflict will arise. This is a fact. You simply can’t go through life with someone and not face adversity—not if it’s a real relationship. The sad truth is that many people avoid dealing with things to keep everything copacetic, but this approach mutes your voice and stifles the relationship. By dealing with conflict—the rupture—and working on repair, you show respect to yourself, the other, and the relationship—a move that facilitates growth and love.

Anita Chakrabarti, a psychiatrist, thinks about the parts of a relationship that make it healthy. She says, “The rough edge between people is where the spark is. There is always turbulence in a relationship, and that turbulence gives both friends a chance to grow emotionally. That is one of the most important things about friendships—you get to learn about how someone else sees the world and realize that they see it differently than you do. If the relationship has trust and affection, the hostility that inevitably comes up between two people is contained, so the aggression is overcome, and the friends work together to grow and learn something new.”

Letting problems fester without addressing them—because you’re either passive or unaware—can do a number on your relationship. This behavior marginalizes your own feelings and manifests in latent feelings of irritation or frustration. This often results in passive-aggressive behavior, not saying what’s on your mind but acting aloof or annoyed.

To listen to the audio version read by author Erin Falconer, download the Next Big Idea App today: