Journey of the Mind: How Thinking Emerged from Chaos 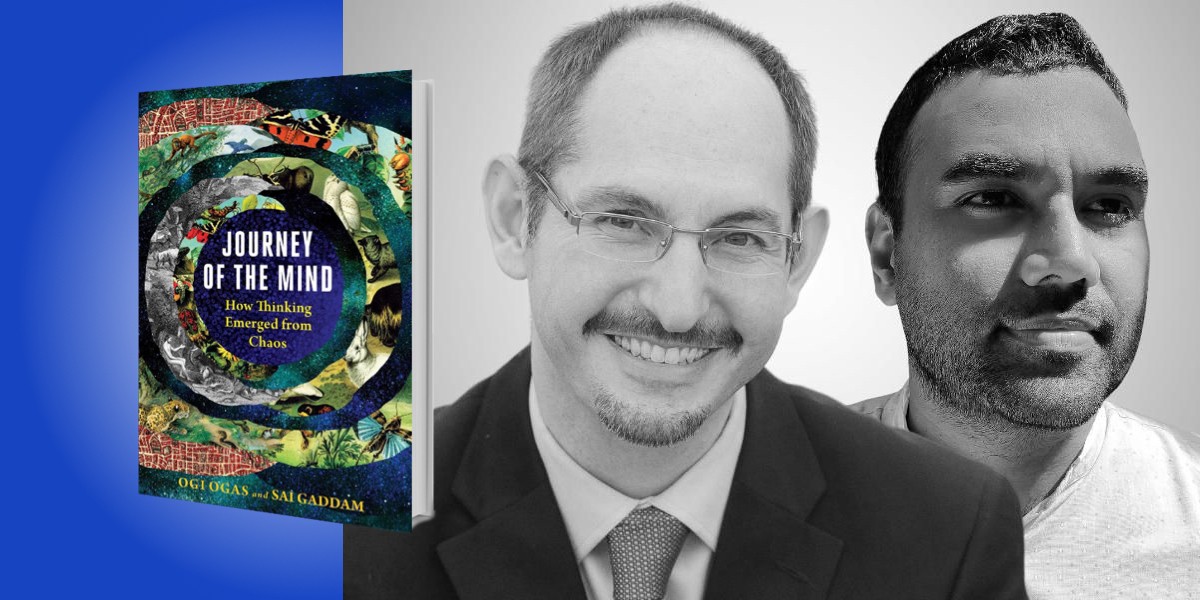 Ogi Ogas, PhD, was a Department of Homeland Security Fellow at the Department of Cognitive and Neural Systems at Boston University and a research fellow at the Harvard Graduate School of Education. He coauthored Dark Horse, The End of Average, and Shrinks, which was longlisted for the PEN/E. O. Wilson Literary Science Writing Award. Sai Gaddam, PhD, was a postdoctoral fellow in the Center for Adaptive Systems at Boston University. He coauthored A Billion Wicked Thoughts.

Below, Ogi and Sai share 5 key insights from their new book, Journey of the Mind: How Thinking Emerged from Chaos. Listen to the audio version—read by Ogi and Sai themselves—in the Next Big Idea App.

1. Consciousness has been solved.

Our experience of experience itself has long been the greatest mystery in the mind sciences. How can the physical activity of tiny, gooey cells in our cranium produce our wondrous experience of joy, and pain, and recognizing our friends, and understanding the meaning of the words that you are reading or listening to right now?

Consciousness has baffled scientists and scholars for centuries—but no longer. Science has finally cracked the code, and in our book, we guide you through the astonishing explanation of consciousness, step by step.

But what matters even more than the details of how physical activity in your brain gets converted into the intangible banquet of awareness is what this explanation can do for us. How can knowing how consciousness works help our lives?

It turns out that the explanation has some extraordinary implications. For one thing, it finally makes clear what must happen in order to download our mind onto hardware. Now, the technology is still a long, long way off—but it’s just barely possible that someone alive today will get to experience it.

The explanation of consciousness also has implications for our roadways. You may have heard that even the best self-driving cars these days are having problems. Current self-driving technology just can’t handle the complicated situations that drivers encounter every day in any major city. In fact, our book suggests there will never be a fully autonomous vehicle—unless it incorporates consciousness.

One final mind-bending implication: the mathematics of consciousness make clear that cities, and even countries, can become conscious—and yes, we argue that the United States is a conscious nation-state.

2. Diversity is the ticket to intelligence.

“If you want to get smarter, you must embrace diversity.”

Stage One are the simplest minds on Earth, including the very first minds that ever existed. We’ll call them “point-thinking” minds, because these minds think in terms of points in space. All microscopic single-celled creatures, including archaea, bacteria, and protozoa, boast point-thinking minds.

Stage Two minds can think about patterns, so we’ll call them “pattern-thinking” minds. All invertebrates, including jellyfish, worms, and insects, possess pattern-thinking minds.

Stage Three minds encompass all the vertebrate minds, including fish, amphibians, reptiles, birds, and mammals. These creatures can think about objects—about concrete things in the world—so we call them “object-thinking” minds.

Only one species has reached the fourth stage of thinking, and that’s us, homo sapiens. We are the only creatures who can think about ideas. But here’s the thing—the idea-thinking mind is not the human brain. What sets humans apart from all other creatures in nature is that an idea-thinking mind is comprised of an entire community of human brains.

The term we use for this idea-thinking network of sapiens brains is the “supermind.” It takes a supermind to think about ideas. We’ll say more about the sapiens supermind in a moment, but for now, let’s examine the role of diversity in boosting intelligence across all four stages of thinking.

The physical component that performs the thinking in point minds is the molecule. Point-thinking minds got smarter over time by diversifying the specific molecules they used to think with, and the most powerful point minds flaunt the greatest diversity of molecules.

Thus, the three-billion-year-journey of the mind shows that, over and over again, minds develop an expanding variety of thinking elements that enable minds to process a greater variety of inputs, and convert them into a greater variety of behaviors according to a greater range of valuations. This applies to the human supermind, too; the best way for a supermind to get smarter is to diversify the people within it.

That means you should diversify your organization, company, or community—not just because it’s a desirable social good, but because it’s a time-tested strategy for improving the competence of minds.

“You should diversify your organization, company, or community—not just because it’s a desirable social good, but because it’s a time-tested strategy for improving the competence of minds.”

3. There is a cosmic purpose for love.

The emergence of each stage of thinking involved a mental revolution—a dramatic expansion of the scope of thinking, which we can think of as a dramatic expansion of the scale of chaos that the mind can adapt to. This helps us understand the transitions between stages. The minds in a given stage eventually reach the limit of what they can adapt to. Thinking hits a ceiling, and the minds in one stage just can’t deal with any new forms of chaos unless they learn to coordinate their activity. In other words, to ascend to a new stage of thinking, the minds in the old stage need to figure out how to connect and collaborate with one another.

And finally, there’s us, the idea-thinkers—where did we come from? Object-thinking minds teamed up with one another to form a community of object minds. This network of object minds—this supermind—can think about ideas.

So what form of physical connectivity bound together human brains into a supermind? Language. Language empowers the sapiens supermind to think about ideas.

Thus, the three-billion-year journey of the mind imparts a very important lesson about the cosmic role of minds connecting with other minds. The only way for minds to ascend to new stages of intelligence, resilience, and awareness is by showing compassion for one another, freely sharing ideas, knowledge, and resources with one another, and accepting one another’s individuality. In plain terms, the only way for the human race to ascend is through love and mutual respect.

“The only way for the human race to ascend is through love and mutual respect.”

4. It takes a supermind to make a self.

What is your “self,” exactly? From the perspective of the journey of the mind, the self is the totality of our experience of our own existence—our memories, dreams, fears, desires, preferences, and crucially, at the heart of it all, our awareness of our own awareness, our experience of knowing, “I am me!”

The journey of the mind teaches us something unexpected about the human self—and about self-awareness. We are the only creature on Earth capable of self-awareness, and there’s a very simple reason why: self-awareness requires language. It’s not the particular words themselves that are essential, but rather it’s the dynamics of language that are so important.

At this very moment, the dynamics of language is binding my mind to yours, enabling the two of us to share awareness of the same ideas at the same time. This mind-to-mind exchange of ideas through language is how the human supermind thinks.

The journey of the mind tells us that the primary influence on the development of our self is not our own brain or our DNA, but the supermind we find ourselves in. Even the words that we use to think about our self in our private moments are all supplied to us by the supermind: words like “soul,” “spirit,” “psyche,” “ego,” “mental illness,” “demonic possession,” “slave,” and even the word “self” itself—all shape our understanding of our own experience of who and what we are.

That means if we want to develop our self to its fullest potential, we should seek out communities of minds that can provide us with the greatest breadth of ideas, perspectives, and voices—such as participating in the Next Big Idea Club!

“At this very moment, the dynamics of language is binding my mind to yours, enabling the two of us to share awareness of the same ideas at the same time.”

5. There is a cosmic purpose to our own lives.

Let’s end with the biggest of big questions: Why are we here? What should we do with the life we’ve been given? The three-billion-year journey of the mind offers new answers to these very old questions.

We are part of a never-ending dance of purpose and chaos—the random, aimless churn of physical matter. The dynamics of minds produce purpose in the universe, and the goal of purpose is to overcome the relentless, destructive power of chaos.

This makes clear that human beings are not the ultimate destination of the journey of the mind. Many people think of consciousness as the pinnacle of thinking in the universe—but that’s not true at all. Consciousness emerged in fish somewhere around a half-billion years ago. Two more far-reaching mental innovations emerged long after consciousness, including language and the human self. This may come as a shock, but the journey of the mind is still going, still battling chaos, still striving to ascend to the next stage of thinking.

Indeed, if we look around our world right now, we see the first hints that the human supermind is pushing toward the emergence of a fifth stage of minds, which we might call “hyperminds.” What is the new form of physical connectivity driving the formation of hyperminds? The internet.

Social media, economic globalization, and cultural globalization can all be understood as a natural and inevitable part of the journey of the mind as it works out the new structures and dynamics that may one day bind together the community of human superminds into a hypermind. Instead of thinking about ideas, this emergent hypermind might think in terms of ideologies.

But the journey of the mind makes clear that humankind will only rise to a new stage of collective awareness if each of us prioritizes a few key behaviors: First, define your own unique purpose. Second, embrace diversity. Third, respect individuality. Fourth, expand your own sense of self by seeking out rich, complex, and nurturing superminds. Finally, and most importantly, show compassion, respect, and tolerance toward others.

When you do these things, you aren’t merely expanding your own consciousness. You are willfully participating in the eternal dance of chaos and purpose by helping create even better minds in the future—minds that will be smarter, more resilient, and more caring than our own.

To listen to the audio version read by co-authors Ogi Ogas and Sai Gaddam, download the Next Big Idea App today: