How the Mind Changed: A Human History of Our Evolving Brain 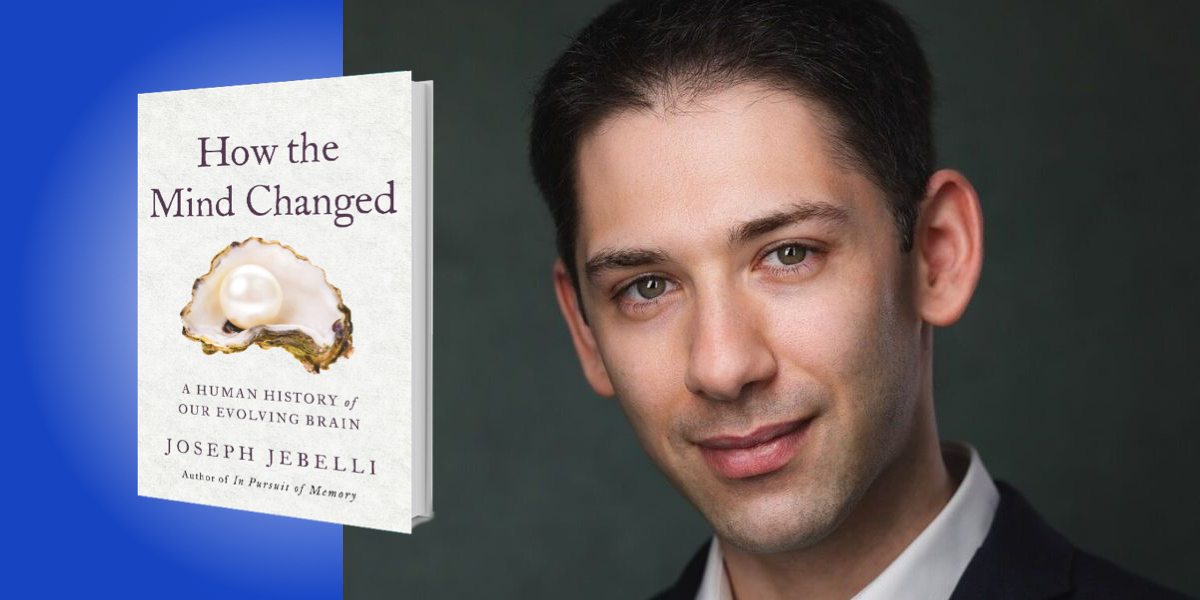 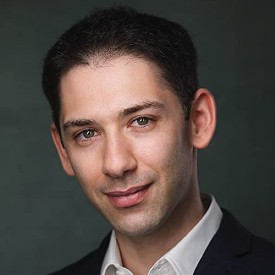 Joseph Jebelli is a neuroscientist and writer. His research specialization is neurodegenerative diseases, and alongside numerous academic articles about the brain, his work can be found in The Telegraph, The Guardian, and the Wellcome Trust.

Below, Joseph shares 5 key insights from his new book, How the Mind Changed: A Human History of Our Evolving Brain. Listen to the audio version—read by Joseph himself—in the Next Big Idea App.

The earliest known human ancestor is called Sahelanthropus tchadensis, otherwise known as Toumaï, and had a tiny brain, about 350 cm3—roughly the size of a child’s fist. Ours are four times bigger, with spectacular abilities that we are only beginning to understand.

Over nearly seven million years of human evolution, our brains increased massively in size. Humans with brains of 900 cm3 started to appear, followed by humans with a capacity of 1,000 cm3. Then, about 500,000 years ago, brain size ballooned to a staggering 1,500 cm3—the size of a cantaloupe. If the human brain ever had a Big Bang, this was it.

Seven million years isn’t that long in evolutionary terms. So, it’s astonishing that, in what was essentially an evolutionary heartbeat, the brain went from consuming 8 percent of the body’s energy to a whopping 20 percent, despite being merely 2 percent of total body weight. Though elephants and whales have bigger brains than humans, our brain is three times larger than what would be expected for an ape of our size. Relative to body mass, we have the largest brain of any living creature.

There are many theories as to why humans have such huge brains. There’s a theory that a rare gene mutation shrunk the jaw and allowed for the skull to expand; the invention of cooking saved energy that would have been used for digesting raw foods; and activation of genetic switches that nearly doubled the neuron count in humans as compared to other great apes. In its colossal size, exclusive identity, and marvelous eccentricity, the human brain became our crowning achievement.

2. Emotions are a social construct.

Our brain evolved the neurobiological hardware to experience primal emotions, such as anger, surprise, disgust, joy, and sadness. Exactly how this happened remains unclear, but it is thought that the brain evolved at least two regions to do it: the amygdala (an almond shaped structure buried deep inside the brain) and the neocortex (the folded outer layer of the brain).

The amygdala is particularly important. As the cognitive scientist Adam Anderson said, “If all the world’s a stage, then the amygdala may be the emotional spotlight.” But missing from this biological narrative is our own influence on emotions. We are not the subjects of inexorable biological forces, but rather have the power to shape and control our emotions.

“We construct emotions all the time. We are not born with them.”

Take fear, for instance. We have more than thirty words in English for fear: panic, terror, worry, anxiety, trepidation, and so on. But we all know that the fear of falling off a cliff is different from the fear of a job interview: one is a natural trigger, the other a socially constructed trigger. Both rely on evolved neural circuits, but the constructed trigger is the product of what our environment has conditioned us to consider “scary.”

Or consider that people started smiling regularly in the Middle Ages due to improvements in dentistry. That’s not to say that the ancients didn’t curl their mouths into something resembling a smile, but the smile we perform today is a constructed emotion.

We construct emotions all the time. We are not born with them. They are not hardwired into the brain. When we think about that upcoming exam, or desire someone else’s possessions, or bump into an old flame, emotions of anxiety, envy, and love can appear and disappear automatically. They are as fleeting and ephemeral as memory—and equally dependent on the times. Compare how we feel about the environment and gender roles today with how we felt about them only a few decades ago. The brain invents emotions, moment to moment, to make sense of an ever-changing world.

3. Memory isn’t about the past.

When we think about memory, many of us imagine a library, or giant filing cabinet in which files are ready to be accessed with the right cues. In ancient Greece, Plato viewed memory as a wax tablet: our memories and thoughts could be stamped, stored, and retrieved later. Socrates likened memories to birds in an aviary, saying, “some in exclusive flocks, some in small groups, and some flying alone, here, there and everywhere among all the rest.”

But that isn’t why it evolved. Memory is about the present and future. When we reflect on experiences, we are accessing earlier brain states in order to influence our current behavior and predict the future. Let’s say you are hosting a dinner party and make a joke about accountants. The guests laugh politely, but you later discover that one of them is an accountant and was offended. Chances are you won’t make a similar joke in the accountant’s company again—not out of shame, but because you remember the negative consequences of your behavior. It’s what neuroscientists call the remembering self. It’s how our brains plan for the future.

The act of remembering is a type of learning. It’s a constructive process that allows us to predict the future based on the past. This is why we are poor witnesses in court: our future-orientated memory is better at imagining possible scenarios than remembering real ones.

“The brain is as much memory as the skeleton is bone.”

The reason scientists have misunderstood memory in the past is due to the language used to describe memory—terms like memory retrieval, memory acquisition, memory consolidation, and so on. These terms presuppose the notion of memory as something separate from the person doing the remembering. Language defines memory as separate from the mind, when actually your brain doesn’t store or retrieve memories. It is memories. The brain is as much memory as the skeleton is bone. As the novelist John Irving put it, “You think you have memory; but it has you!”

Autism is not a disorder—it is simply a different kind of mind, a neurodiverse mind. The autistic brain works differently from non-autistic brains and is often linked to enhanced intelligence, memory, and strong attention to detail (systematizing). For this reason, our autistic ancestors likely played a fundamental role in shaping early human societies by suggesting new ways of seeing the world.

For example, many people with autism possess a deep understanding of natural systems, which would have enhanced our understanding of calendric systems and maps. These were critical innovations during times of environmental strife, such as the Ice Age. What’s more, people with autism often possess enhanced vision, taste, and smell. The incorporation of these skills into early human groups would have led to specialists within the community who would have been indispensable for tracking, hunting, and farming systems.

Art also may have benefitted from our autistic forebears. Cave art, such as the paintings in the Chauvet Cave of southern France, demonstrate exceptional realism and a mystifying love of detail. Early humans relied on memorizing their surroundings, and the autistic brain’s ability to focus on parts rather than wholes would have made them skilled artists.

For many autistic people, new understandings of how autism shaped human evolution is helping them see themselves as a diverse community of extraordinary individuals with unique brains, long oppressed by a dominant culture of unenlightened, unchallenged neurotypicals. It is indisputable that autism is with us for a reason, and without autism, human communities would not be where they are today. Autism should never be something to solve. It is one of the most beautiful spin-offs of brain evolution.

5. The future of human brain evolution isn’t what you think.

Our brains are still evolving, but more importantly, the very nature of brain evolution is also changing. New technologies such as brain–computer interfaces (BCIs), artificial intelligence, reprogrammable stem cells, and genetic tools such as CRISPR (a technology that allows scientists to make precision edits to DNA) may forever change what it means to be human.

Let’s take brain-computer interfaces (BCIs) as one example. Many people now use BCIs. In 2017, researchers at the University of California, Irvine, used BCI technology on a paraplegic man to restore his walking after a spinal cord injury. Other researchers use BCIs to stimulate the visual cortex to treat the blind, restore lost connections in stroke victims, and scan the brain for depression. Treating the mind with machines dubbed electroceuticals has helped hundreds of thousands of people with hearing loss (using cochlear implants) and thousands of people with Parkinson’s disease and epilepsy (using deep brain stimulation).

“The next step for our brains may not be organic evolution.”

Such technology is allowing humans to shape their own evolution. The first to do exactly that is Neil Harbisson, the world’s first officially recognized cyborg: a being that is part human, part machine. Harbisson has a rare genetic condition called achromatopsia, or complete color-blindness, meaning he sees the world in shades of grey. If you met Harbisson, you would notice a long black antenna protruding from his head, which translates wavelengths of light into musical notes. This gives Harbisson the extrasensory perception of literally feeling colors inside his head.

The next step for our brains may not be organic evolution. The futurologist Ian Pearson imagines a future in which humans merge with machines to become a new species, called Homo cyberneticus. And it’s fascinating to see a new movement called transhumanism take root, which aims to upgrade humans with gene enhancements, self-repairing brains, and tech implants to such an extent that we become different, posthuman beings.

Nothing in our brain is fixed. In its endless cycles of change, susceptibility to nurture, and its power to shape the world, our minds offer limitless possibilities.

To listen to the audio version read by author Joseph Jebelli, download the Next Big Idea App today: