The New Megatrends: Seeing Clearly in the Age of Disruption 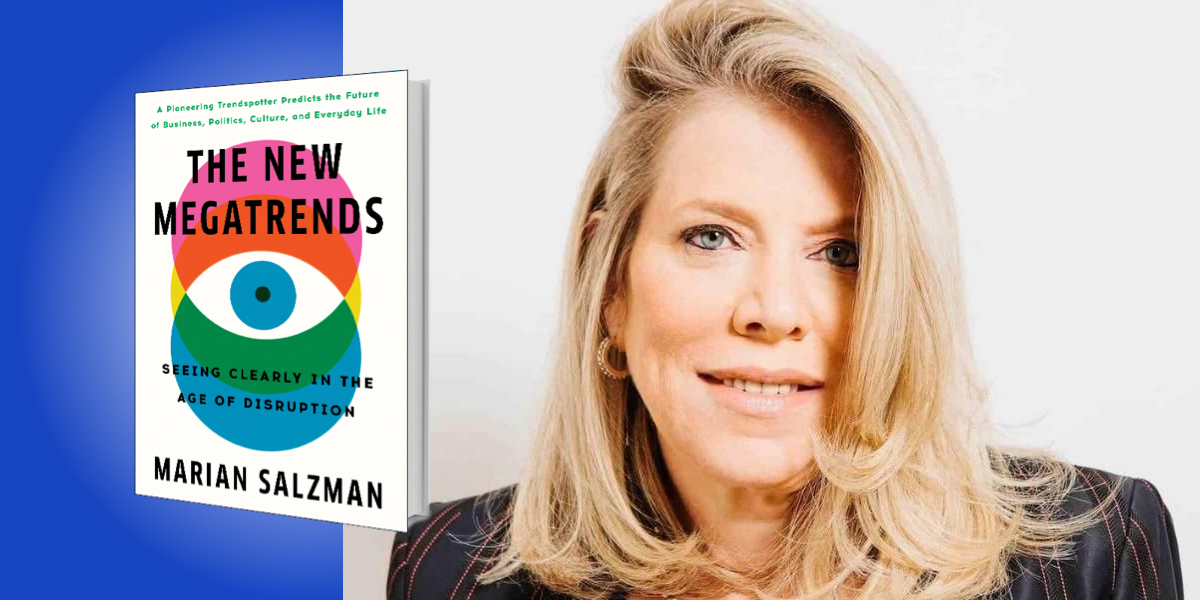 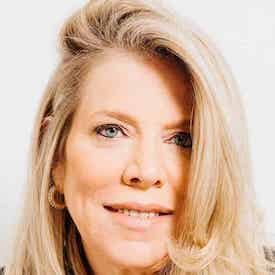 Marian Salzman has spent four decades as a communicator and trends analyst, working for major advertising agencies and PR firms, and now is Senior Vice President, Global Communications for the tobacco company Philip Morris International. She has written more than a dozen books, and is notorious for introducing the world to the metrosexual man back in 2003.

Below, Marian shares 5 key insights from her new book, The New Megatrends: Seeing Clearly in the Age of Disruption. Listen to the audio version—read by Marian herself—in the Next Big Idea App.

1. The 21st century has been operating on a two-decade delay.

On the last day of 1999, amid the Y2K frenzy, we braced for cataclysmic disruption as the clock clicked over to the new year, fearful that predictions of planes falling from skies, electric grids gone dark, and financial systems in chaos would throw the world into turmoil. Instead, the dawn of the new millennium was pretty much a nothing-burger. There were a few techno glitches, but nothing massively disruptive. The impact we had anticipated then came in 2020, when the pandemic and a primal scream for racial justice upended the world.

At the turn of this century, we didn’t plunge into turmoil, but neither did we ascend into a shiny era of advances and dreams fulfilled. Instead, we slid into a two-decade period of economic and ecological downturns, terrorism, divisiveness, extremism, and mass shootings—all against a backdrop of newly digitized lifestyles.

By 2019, technology still posed a threat, but in a markedly different way. It had become an even more inescapable aspect of life, with an outsize influence not just on our behavior, but also on our opinions and beliefs. In contrast to 1999, when well-deployed technological fixes helped avert a potential Y2K crisis, digital technology and the always-on mentality left us ill-prepared to meet the threat of SARS-CoV-2. The insidious effects of constant connection, echo chambers, and pervasive algorithms that emerged over the intervening two decades contributed to populations with little trust in institutions, an anti-expert mindset, and deep ideological rifts that cast doubt on objective truths. The forces of science must now contend with the forces of social media. We’re watching that potentially life-altering battle play out in real time.

2. Most people are adopting a bunker mentality to prepare for the next crisis.

Life was chaotic prior to 2020, but now it seems even more uncertain. With the ever-shifting winds of COVID, how can we make concrete plans five months out, much less five years? Globally, we have seen skyrocketing levels of stress, anxiety, depression, and alienation—all exacerbated by the pandemic. In our far-flung, fast-moving modern societies, people lack the sense of connectedness and grounding that previous generations took for granted. It has reached the point where some governments have appointed Ministers of Loneliness to combat isolation, especially among the elderly.

So, what are we going to do about it? While governments and employers are putting mental wellness programs in place, individuals are devising inventive ways to gain at least the semblance of peace of mind. One example is the embrace of all things small—from tiny houses to tricked-out backyard retreats. We want the control that comes from manageable size.

“With the ever-shifting winds of COVID, how can we make concrete plans five months out, much less five years?”

Another is the prepper movement. This used to be a territory owned by extremists. If you’ve seen Doomsday Preppers on National Geographic, you know all about heavily armed bunkers in rural areas and terms like “bugout bags” and “zombies” (less prepared people who will aggressively come after your stockpiles). That’s not what I’m talking about here. I’m referring to the “prepper lite” trend. Due to the pandemic and an increase in extreme weather events, ordinary people are stockpiling essential goods, wanting the security that comes from knowing their family can survive a couple of weeks without outside help.

In the coming years, we will see upscale apartment complexes and housing developments compete on preparedness. This will include storage facilities packed with essential goods, but it may also extend to private medical care, and even armed security forces. People are no longer certain that their governments, healthcare authorities, and local law enforcement will be there when they need them. The chasm between rich and poor just got wider.

On a more basic level, people will vie to be more self-sufficient. Many of us feel incapable of performing basic tasks our grandparents could do—like vegetable canning, basic carpentry, and car repair. We want to recapture those skills, both for practical reasons and for the relief of knowing that we can take care of ourselves and our loved ones in a pinch. You’re going to see a lot more local and online courses teaching skills of life.

3. The ties that bind are fraying, leaving us trying to find our “people.”

Once upon a time, our “people” were obvious: family, close friends, neighbors. Now, families are dysfunctional, close friends are few and far between, club memberships and religious affiliations are petering out, and few people retain strong geographic ties (a trend exacerbated by remote work). Many of us have only tenuous ties to people and places.

To understand how disconnected we are as a society, consider the trend toward living alone. In some U.S. cities—including Cincinnati, Pittsburgh, and St. Louis—more than a quarter of adults live alone. In Japan, it’s estimated that nearly 40 percent of households will be solo-occupant by 2040. That pales in comparison with Sweden, where a majority of households are already one-person. The new nuclear household: me, myself, and I.

With social institutions in flux and community ties dissolving, our focus has turned inward. We use smartwatches and other devices to monitor our steps, blood glucose, sleep patterns—you name it. We use technology to create highly personalized environments in which we listen (alone) to customized playlists and watch streamed entertainment. We can remain hermetically sealed within our media bubbles, existing in worlds of our own making.

“The new nuclear household: me, myself, and I.”

As we feel the loss of human connections, we will seek ways to build “tribes,” some of which will be virtual. We’ll join online communities based on shared interests, hobbies, and sociopolitical views. But we will also try to replicate the ties of old, which will include an uptick in intentional co-living. Two decades from now, generation- and interest-based congregant living will be much more common. This will be for reasons of affordability and sustainability, but also because we want to be able to leave our private bubbles to spend time with people whose names we know.

4. There is no longer a linear life path.

When I was growing up New Jersey in the 1970s, my life path seemed set in stone. I would go to college after high school, start a career, marry, buy a starter home in a suburb of New York, and have children. I only made it partway through that list. I lived in New York City after college, traveled endlessly for work, and spent time living in the Netherlands. I have a late-life partner and am close to his children, but I chose not to marry or have children of my own. Like many people my age, I’ve held multiple jobs and worn numerous hats. When I was turning 60, I switched from the world of advertising and PR to the client side, and moved to Switzerland.

My life is completely nonlinear by my parents’ standards, but would likely seem staid from the perspective of younger generations. The last millennium’s linear life path has given way to a constellation of choices, offramps and onramps, and temporary solutions. We have entered the Modular Era. People are cobbling together careers that include short stints at various companies, frequent shifts between fields, side hustles, gig work, and freelancing. As remote work becomes standard in some industries, more people will hop from place to place around the globe.

Many things accepted prior to 2020 will be questioned, such as long commutes to the office and 40-hour workweeks. As workers insist on greater autonomy—and as employers discover that flexible policies pay off in productivity and employee retention—we will see significant changes, including a shift toward a four-day workweek. Among the companies already making these moves: Microsoft Japan, Shake Shack, Toshiba, Panasonic, and Unilever New Zealand.

“The last millennium’s linear life path has given way to a constellation of choices, offramps and onramps, and temporary solutions. We have entered the Modular Era.”

Similar questions will be asked about educational systems. In the digital age, does it make sense for kids to spend six or seven hours a day sitting still at their desks? Is the standard curriculum even preparing youth for the jobs that will be available when they graduate? In the era of Khan Academy and augmented reality headsets, education should be personalized. We’re at the cusp of a modular, customized educational system that allows children and adults to accumulate certificates and hands-on experience through virtual apprenticeships instead. We’re already seeing Grow with Google-type career certificates for people interested in tech jobs.

Our priorities are shifting, and yesterday’s rules no longer apply.

People no longer feel boxed in by the identity assigned at birth. More than 20 years ago, when I released my annual trends report, number six on the list was a trend I called “Everyway People.” I wrote:

The query “Who are you?” will be more difficult to answer. … Sometimes we’ll be single, sometimes we’ll be partnered; we’ll be corporate executives one day and contract workers the next. We’ll identify with multiple ethnicities, interest groups, and philosophies. Marketers seeking to segment consumers will try in vain to set their sights on a moving target.

Two decades on, the Everyway People trend is gaining force, most notably in gender identity, sexual orientation, and lifestyle. Rigid definitions of femininity and masculinity are giving way to a flexibility that simultaneously heals wounds and opens battlefronts.

The world is blurring. All sorts of boundaries—physical, psychological, social/cultural, intellectual, sexual, temporal, and more—are in near-constant transition as societies adapt, progress, regress, and reconsider. As always with cultural shifts, there is pushback, including attempts to reimpose traditional gender roles. That’s the thing about trends: For every yin, there is a yang. So, expect more efforts to return things to the way they “used to be.” But know, that even as lines are crossed, erased, and redrawn ad infinitum, the trendline favors blurring.

To listen to the audio version read by author Marian Salzman, download the Next Big Idea App today: