Rewired: Protecting Your Brain in the Digital Age 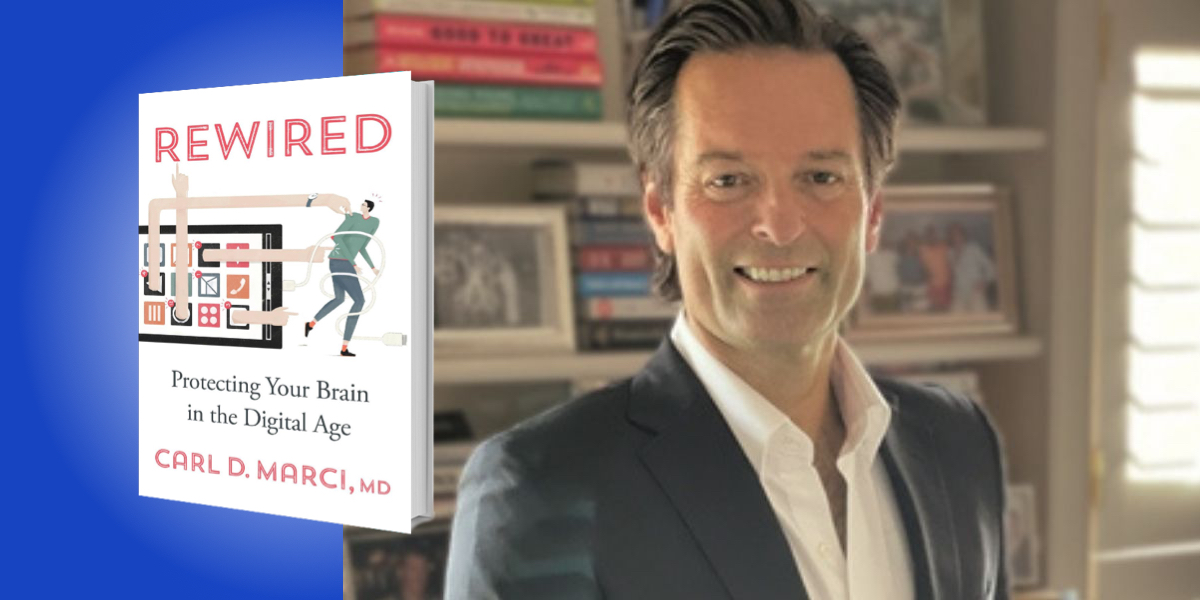 Dr. Carl Marci is a board-certified psychiatrist and Harvard neuroscientist. He spends time as a health technology entrepreneur and executive through his role as Chief Psychiatrist and Managing Director at OM1, a health data company.

Below, Carl shares 5 key insights from his new book, Rewired: Protecting Your Brain in the Digital Age. Listen to the audio version—read by Carl himself—in the Next Big Idea App.

1. Our brains are uniquely wired for social interactions.

The human brain consists of between 60-80 billion neurons, each one making between 10-20,000 connections. It is thought to be one of the most complex entities in the known universe. But it is also incredibly vulnerable, particularly early in life. Newborns, toddlers, young children, even teenagers, need continuous attention from adult caregivers as their brains grow. We form early attachments that influence our future relationships; we make friends who influence what we watch, wear, and say; we work in groups that form societies and build amazing technologies; we stay connected to people we love for most of our lives.

Humans are wired for social interactions. Thus, our brains are endowed with networks of neurons that compel us to form strong attachments and social bonds over many decades. One key area of our brains necessary for social connection and a key factor in our success as a species is the prefrontal cortex.

2. Beware of your smartphone.

When thinking about transformative technologies, the time it takes to go from 40 percent to 75 percent market penetration is considered an important benchmark by historians. It took electricity and the telephone 15 years, then personal computers and the internet about 10 years to achieve this goal. Television was the reigning champion at five years until the atom-splitting moment in 2007 when Steve Jobs and Apple introduced the iPhone. It took just three years for smartphones to set the record for the fastest adoption of any major technology in modern history.

“It took just three years for smartphones to set the record for the fastest adoption of any major technology in modern history.”

There are many consequences from this record setting rate of adoption. One is the massive shift in how much media we consume as a society. In 2002, the average American adult consumed about six to eight hours of media per day (mostly from TV, radio and videocassettes). Today, that number is nearly double. There are similar figures for children of every age. How did Americans find an extra 30+ hours per week over the last two decades to consume more media? The answer is the proliferation of mobile smartphone applications and the rise of media multitasking.

As a result of spending so much time with our smartphones and a growing number of apps that penetrate nearly every aspect of our lives, we use media and technology as a mood regulator. We no longer tolerate boredom because we don’t have to—stimulation and reward are an arm’s reach away. Over time, online social media and other applications began displacing offline face-to-face interactions. This disrupts attachments with parents, weakens bonds with friends, and diminishes the full capacity of our prefrontal cortex as we become more distracted, divided, and depressed.

3. To manage the impact of smartphones, we need to think developmentally.

The human brain goes through an impressive transformation from birth to adulthood and we have a pretty good understanding of how and when these changes occur. Can we use developmental neurobiology to inform our understanding of the impact mobile media consumption has on children and adults alike? The short answer is yes.

As young children march through developmental milestones, their brains are growing and changing in fundamental ways. From 0-3 years, the ability of a very young child to learn from most videos is extremely limited. This is well illustrated by Baby Einstein videos—the now defunct series for infants. Despite their wild popularity with parents, research showed that these videos were not only unable to teach meaningful concepts, but the more infants watched, the further they fell behind. The failure of Baby Einstein is the result of the “video transfer deficit,” where very young children lack the neural scaffolding to take information from a two-dimensional world of screens into their three-dimensional world of reality.

“The constant metrics and microaggressions of social media barrage the teen brain struggling with questions about self-esteem and how to fit in the world.”

Fast forward to the early teen years, and the brain enters a phase of growth characterized by another developmental vulnerability. As hormones are released, the emotion centers and reward centers race ahead of the prefrontal cortex which needs at least another decade to fully mature. This developmental lag is summarized by a simple metaphor to explain the complexities of the teen brain and their impulsive behaviors: “too much gas and not enough brake.”

Enter social media platforms, with instant feedback on highly curated images and the proverbial “best time ever” for all—except your child. The constant metrics and microaggressions of social media barrage the teen brain struggling with questions about self-esteem and how to fit in the world. This is a recipe for massive increases in ADHD, anxiety, depression, and teen suicide.

Even adults, with their mature prefrontal cortex, are not immune to the temptations of responding to every app ping and message ring. The seduction of media multitasking, the risks of constant social media comparisons, and an internet laden with advertising superstimuli are all designed to keep you coming back for more. This contributes to rising rates in adults of anxiety, depression, narcissism, and loneliness.

There’s a continuum between healthy habits and unhealthy addictions, and the health of our brains and the prefrontal cortex are key. Habits are routines that we develop to save time and preserve cognitive capacity for more complex tasks. We don’t have to think about routine habits that service recurring needs. I would argue that nearly all of us have changed our habits and behaviors around smartphones and related technologies. When you change your habits, you change your brain—it’s that simple.

There are a lot of wonderful things about mobile media, information, and communication technology. But we are all walking around with an incredible amount of computational power with full access to the internet and a world of temptation and titillation in our pockets. Sometimes habits slip into addiction. It’s hard to tell with technology when this line has been crossed since it is so easy to hide unhealthy smartphone habits and their use is pervasive.

While we are all at some risk, there is a subset of people who have developed problematic habits around gaming, shopping, social media, and pornography. This comes, in part, from the omnipresence of smartphones and their applications. There is a growing understanding that there is another subset of people who have true addictions that require serious psychiatric interventions. We need to be more nuanced in our assessments, we need better tools for screening, and more data to understand the difference between tech habits and tech addictions.

5. There is hope for a future with tech-life balance.

There are many causes for worry about the corrosive effects of mobile media, information, and communication technology in our lives and brains. But there are also reasons to believe that we will create a common expectation that these technologies can and should support us, not divide and depress us. Humans are capable of positive change and there are signs that we will survive the threats of our many smartphone habits. Our incredibly adaptive brains will see us through the technology revolution of the Digital Age—a revolution that will likely accelerate.

But there is a difference between surviving and thriving. We need to be more proactive than reactive in order to create a digital literacy for our children and a tech-life balance for ourselves. We need healthy brains functioning at their peak if we will have any chance of dealing with the many problems society faces. The same brain science that informs our understanding of the negative consequences of too much media consumption and unhealthy smartphone habits can also inform clear recommendations about how to move forward. That is why there are ten scientifically supported recommendations in the final section of the book—all designed to protect the prefrontal cortex, help make healthy brains, and guide us toward a brighter future.

To listen to the audio version read by author Carl Marci, download the Next Big Idea App today: