The Righteous Mind: Why Good People Are Divided by Politics and Religion 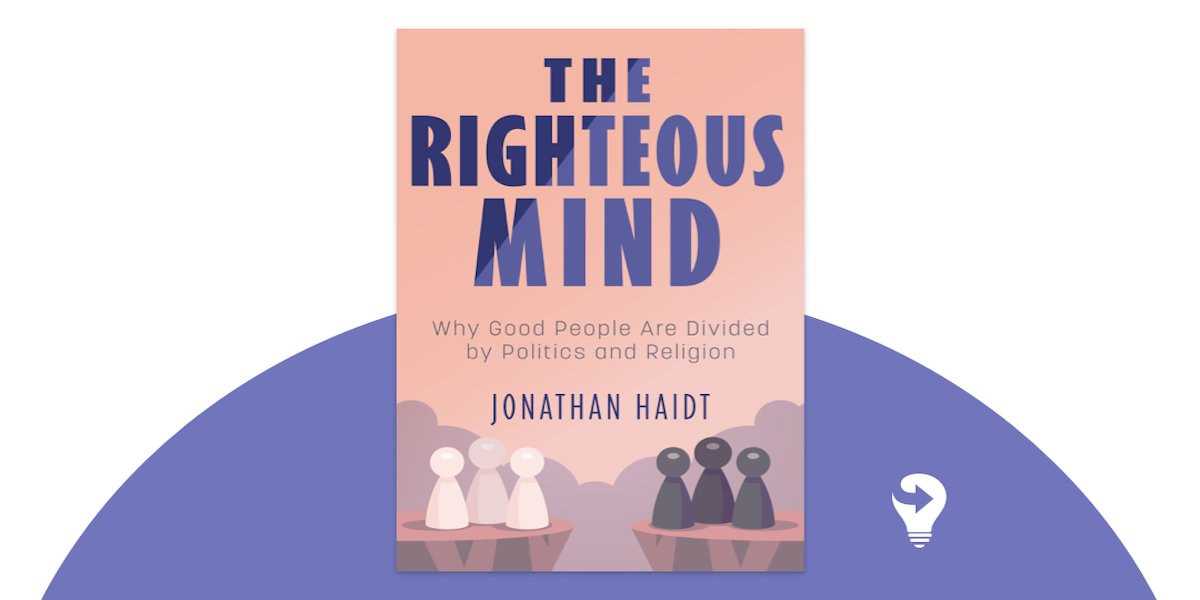 Have we ever been more divided as a nation? At a time when American liberals and conservatives are at each other’s throats, it can seem like we’re caught in a sort of death spiral of polarization—not even able hear each other’s opinions respectfully, much less come together to craft legislation or solve big social problems. But in truth, this tendency for people to split into oppositional groups runs deep in human history.

In 2012, psychologist and New York University professor Jonathan Haidt released The Righteous Mind: Why Good People Are Divided Over Politics and Religion, the result of years of research into how unconscious moral systems color our worldviews and can lead to tribal divisions. The book quickly became an influential bestseller that the New York Times called “a landmark contribution to humanity’s understanding of itself.”

Read on for five key insights from The Righteous Mind. To listen to the audio version of this Book Bite, download the Next Big Idea App today.

Haidt’s first maxim of moral psychology is that Intuitions come first, strategic reasoning second. In other words, while we may think our opinions are based on some conscious, rational reason, in most cases we’re responding to an unconscious “gut feeling,” and only later coming up with reasons to justify that instinct.

The philosophical debate over whether reason or emotion rules the human psyche is an ancient one. While Plato argued for the primacy of reason, 18th-century Scottish philosopher David Hume thought that emotion was dominant, and the American founding father Thomas Jefferson suggested a middle path where both forces shared equal weight. In the end, drawing on numerous studies and experiments that he and other colleagues conducted, Haidt argues that Hume won the debate, and that reason truly is the servant of the passions.

Haidt uses the metaphor of a person riding an elephant. While it might look like the rider is in control, the outcome of the ride is really up to the much more powerful elephant. Similarly, our intellect and reason seem to be driving our opinions, but our more powerful unconscious intuitions are really running the show, leading us toward particular opinions, preferences, and judgments. Our reasoning mind is really just along for the ride.

There’s a key phrase in Haidt’s first principle that needs explaining: strategic reasoning. Haidt argues that—contrary to what Platonists might believe—humans don’t use reason to reach some higher, objective, capital-T Truth. Instead, we use reason to “pursue socially strategic goals.” In other words, to argue, persuade, and convince others to join our team, whatever that team may be. Reason is a tool used to “further our social agendas,” agendas built on our largely unconscious moral foundations.

The second part of The Righteous Mind describes the foundational values on which Haidt argues all of us build our moralities. According to Haidt, those core values are: care, fairness, loyalty, authority, sanctity, and liberty.

“Liberals generally do place some value on loyalty, authority, and sanctity, but not much. Meanwhile, these three are often ride-or-die moral foundations for conservatives.”

The moral foundation of care is rooted in our parental instinct to look after children, as well as our aversion to harm done to ourselves. We don’t like pain, and so anything that causes pain either to us or to others typically triggers our care responses. According to data that Haidt and his colleagues gathered over a ten-year period, while both American liberals and conservatives tend to value care, it is typically a higher priority for the left.

Fairness is a value that Haidt initially thought was also largely associated with liberals. But this one is a bit more complicated. While fairness in the sense of equality (as in “treat everyone fairly”) resonated with many liberals that Haidt studied, he found that conservatives also valued fairness highly, although more in the sense of proportionality, as in “do your fair share.”

The next three foundations—loyalty, authority, and sanctity—are almost exclusively the domain of conservatives. According to Haidt, overt patriotism, patriarchal hierarchy, and religious fervor are more common features of conservative worldviews, and people on the right tend to value all three of these moral foundations much more highly than liberals. This isn’t to say that liberals don’t value these foundations at all; for instance, a liberal reading of loyalty would be that each person is “a citizen of the world.” You can contrast that view to the more conservative version of loyalty as loyalty to country or nation. To give another example, Haidt points out that although liberals are more likely than conservatives to be atheists, the reverence for nature in the environmental movement is a version of sanctity that replaces religion for the left. So liberals generally do place some value on loyalty, authority, and sanctity, but not much. Meanwhile, these three are often ride-or-die moral foundations for conservatives.

The sixth foundational value that Haidt describes is liberty. This value also has both a liberal and a conservative spin. For liberals, the ideal of liberty is focused primarily on underdogs, victims, and powerless groups everywhere, leading, for example, to the fight for civil rights. For conservatives, on the other hand, liberty is best defined as “the right to be left alone.”

“Because they engage all six moral foundations, Haidt argues that conservatives and Republicans, quite simply, ‘understand moral psychology’ while liberals and Democrats don’t.”

If you’ve been keeping score, you’ll notice that there’s a clear difference in how liberals value each foundation versus how conservatives value them. Liberals tend to more highly value care, liberty, and fairness (in that order), and place very little weight on loyalty, authority, and sanctity. On the other hand, conservatives more evenly divide their foundations, placing relatively equal weight on all six foundations, at least for what Haidt calls “social conservatives.” There’s a third measure for libertarians, who put almost all their emphasis on liberty, some on fairness, and very little on the others. However, Haidt points out that despite their differing moral matrices, libertarians and more mainline conservatives often unite to the detriment of their liberal opponents.

Because they engage all six moral foundations, Haidt argues that conservatives and Republicans, quite simply, “understand moral psychology” while liberals and Democrats don’t. He calls this gap the conservative advantage. Because conservative politicians actively use all of the weapons at their disposal, they are much better at motivating voters. Democrats, who disproportionately appeal to only two foundations, can engage an activist base well, but have a difficult time winning others to their cause. It’s quite a fitting coincidence, then, that the elephant is the Republican symbol, because they know that the elephant of emotional appeal and intuition is in charge.

If liberals want to broaden their appeal, Haidt argues they need to learn from their opponents and more actively engage all six moral foundations.

One key function of moral foundations is to show us who’s in our group and who is not. Who prioritizes the same moral foundations as us, and is therefore trustworthy? And who prioritizes other foundations, or defines their foundations differently than we do, and is untrustworthy? Haidt points out that political psychologists and other pundits like to talk about voter motivations in terms of the question “What’s in it for me?” However, based on his Moral Foundations Theory, Haidt argues that “[o]ur politics is groupish, not selfish.” In other words, the more important question is “What’s in it for my group?”

“We are brought together into our groups by our moral foundations, but those same foundations also make it incredibly difficult to even consider the arguments of the other side.”

Haidt begins his discussion by looking at evolutionary causes for our groupish nature. Natural selection—the process by which evolution is carried out—is a multilevel selection, meaning that it occurs at the level of the individual and at the level of the group. Individuals that are best-fit for their particular environment are more likely to survive and to procreate. Similarly, groups that are best-fit also survive. Those groups that learned to “cooperate and work for the good of the group” edged out the competition. This idea is known as group selection.

Fast-forward to the 21st century, where our current highly partisan political climate is a result of group selection based along the lines of moral foundations. Haidt argues that our group moralities are so strong that they bind and blind us. We are brought together into our groups by our moral foundations, but those same foundations also make it incredibly difficult to even consider the arguments of the other side. The foundations are so deeply engrained that they’re automatic. This is the intuitive elephant exerting its control, responding instantaneously without a moment for the reasoning rider to fully consider alternative views. So, we stay strong in our group and are blind to the perspectives of other groups.

5. Liberals and conservatives need each other.

Haidt argues that American liberals and conservatives form a sort of yin and yang, and as in that famous Chinese symbol, a holistic worldview contains both elements. While much of The Righteous Mind is dedicated to explaining how we form and solidify our differing political groups based on instinctive values, Haidt also wants to offer tools to help us communicate and connect across those differences. Even though conservatives, liberals, and libertarians engage the six foundational values differently, somewhere deep down there is a shared coding—and if there is shared coding, there’s the possibility to come together.

At the level of policy, Haidt suggests that goals can be set out in ways that express both liberal and conservative priorities. For example, the effort to reign in multinational corporations could highlight both the goal of lifting up the world’s poor (care, fairness), and creating opportunity for small and medium-sized American businesses (fairness, loyalty, liberty). Conversations about immigration policy should acknowledge the value of treating migrants decently (care, fairness) along with the importance of the rule of law and enforceable borders (authority, loyalty). By acknowledging the values of each side, we have a better chance of communicating with one another and creating policies that are broadly acceptable to all.

To listen to the audio version of this Book Bite and many more, download the Next Big Idea App today: