The Urge: Our History of Addiction 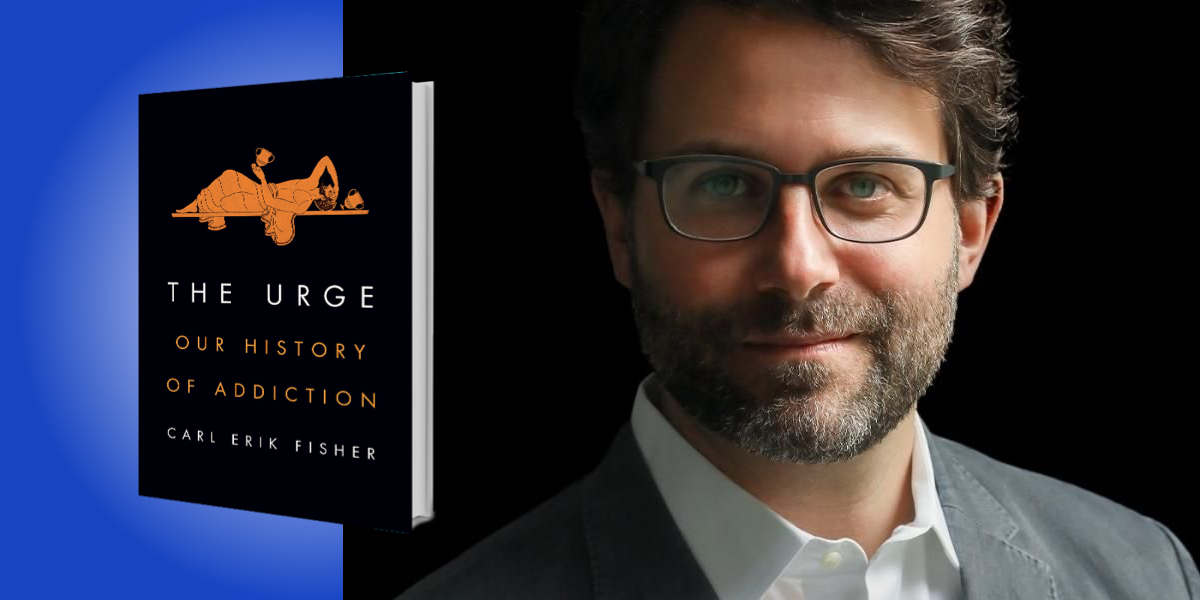 Carl Erik Fisher is an addiction physician who studies and teaches ethics, psychiatry, and neuroscience at Columbia University. He is also in recovery from addiction.

Below, Carl shares 5 key insights from his new book, The Urge: Our History of Addiction. Listen to the audio version—read by Carl himself—in the Next Big Idea App.

1. Addiction is a human universal.

A little more than a year after I graduated from medical school, I went on a drinking and Adderall binge that got me admitted to the psychiatric ward at Bellevue Hospital. I was sent to a specialized rehab for doctors, and in time, returned to my training under supervised treatment.

Fast forward a few years, and I felt pretty stable in my recovery. I had joined the psychiatry and bioethics faculty at Columbia, and I was training as an addiction medicine specialist. But despite studying neuroscience and psychology, I was troubled by some huge, unresolved questions about my condition—mainly, what exactly had gone wrong in me?

I got little help from my home disciplines of medicine and science, which were riven by bitter divisions about theories of addiction. I had the sense that other fields could help, so I started looking to history, philosophy, and more. I found that addiction is an idea with a long and enriching history. The word’s origin encapsulates a key lesson: addiction is a human universal.

“Addiction” comes from theology. When the word first entered the English language, it didn’t mean a disease, but a “strong devotion.” It could be positive or negative; you could addict yourself to naughty practices like necromancy, or good pursuits like prayer. It wasn’t a status, but an action. Addiction was not something that happened to you—it was something you did.

Most importantly, the word reflected a nuanced point about will and agency, pointing toward a gray area between freedom and powerlessness present in all of us. This core mystery of self-control has been taken on by philosophers from Aristotle to the Buddha. From the beginning, and for most of history, this was the point of addiction—it was an idea about this mystery of the human condition.

“Addiction was not something that happened to you—it was something you did.”

2. Drug epidemics are nothing new.

We are in the midst of a tragic overdose crisis. This is a mass-casualty event that is killing over 100,000 Americans a year. As awful as this is, it’s not unique. Since the beginning of modern commerce over 500 years ago, drug epidemics have wracked the modern world with disturbing regularity.

For example, from the 1500s on, tobacco use exploded across Europe and Asia. Anti-tobacco writers called it a “plague intolerable.” Then, in the early days of American independence, there was a massive epidemic of alcohol, supercharged by cheap molasses from slave plantations being turned into rum by enormously profitable distilleries. The first American opioid epidemic occurred in the 1860s and 1870s, fueled by the unspeakable trauma of the Civil War, the pharmacological enthusiasm of American doctors striving to capture market share, and the development of new, powerful ways of delivering opioids, such as the purification of morphine and the development of the hypodermic syringe.

What we see across those examples is a clear pattern in which drug epidemics occur at the intersection of three main causes. First, a new drug or a new way of taking a drug is often an important component. Secondly, powerful industries are often behind the scenes pushing those drugs. And third, the ground is usually prepared by social wounding, oppression, and trauma—from the plagues, revolts, and wars driving tobacco use in the 17th century, to the despair of inequality, isolation, and alienation driving our 21st-century crisis.

In both medical school and rehab, I was taught that addiction was an extreme mental illness: a “disease.” It was a damaged condition, discretely divided from the rest of the normal population. This is a misleading idea rooted in our history, and it does more harm than good.

In 1784, following the Revolutionary War, one of the Founding Fathers, a physician named Benjamin Rush, took a rare vacation through the Pennsylvania backcountry. He was struck by the postwar poverty and social upheaval. Whiskey and rum were everywhere, and binge drinking was widespread. Americans drank alcohol, not coffee, to wake up before work—then for the “elevens” (at 11:00 a.m.), then again in mid-afternoon, before dinner, and more—not to mention at meals themselves, as water was thought to be unhealthy. Rush returned to Pennsylvania and began calling habitual drunkenness a disease. But Rush was only arguing that medicine could help in part, as he recognized that social and economic policies were also central to the problem.

The word “disease” became a plank of alcoholism activism in the 1940s and 1950s, when advocates were trying to force open the doors of hospitals. This was a period of harsh stigma against people with addiction—to the point that the medical profession had almost totally retreated from attempting treatment—so they used disease language to try getting a foothold.

Now, more than half a century later, the disease notion has gotten twisted. Disease language slips too easily into the notion that medical science is the best framework for understanding addiction. Biologically reductionistic descriptions of “brain disease” imply that people have no capacity for choice or self-control. This strategy is meant to invoke compassion, but it doesn’t work. The best studies have found that biological explanations for mental disorders increase aversion and pessimism toward people with psychological problems. This notion is dangerous not only because it implies fatalism, but also because it narrows our view of a multi-level problem—one that requires, for example, less of an individualized perspective, and more attention to community support, like the problems Benjamin Rush saw over 250 years ago.

“This notion . . . narrows our view of a multi-level problem—one that requires, for example, less of an individualized perspective, and more attention to community support.”

In the 1980s, seemly overnight, crack cocaine exploded throughout the U.S. The media was saturated with stories of an unimaginably powerful new drug, and the moral panic was supercharged by racist stories about dangerous Black and Brown users infecting white America. Physicians and researchers followed suit, describing crack as a superdrug, “the most addictive drug known to man,” one that would cause “almost instantaneous addiction.” Soon, the star of that story became dopamine, a neurotransmitter that had been a relatively obscure molecule.

Dopamine was supposed to govern the “pleasure center in the brain,” responsible for all the good feelings produced by food, sex, and drugs. This explanation became immensely fashionable during the crack scare. Dopamine was called the “master molecule of addiction,” and fueled by the popularity of neuroimaging in the 1990s, the story was that drugs hijack the natural reward system of the brain through dopamine.

This is still a common story about addiction—but it’s false. Major figures in academia still get this wrong. Dopamine is not a pleasure molecule; it’s about desire and wanting, not liking. Also, not all drugs bombard the brain with dopamine—crack does powerfully and directly release dopamine, but other drugs (including cannabis and opioids) do not. But the idea of “dopamine hijacking” was a perfect reflection of predominant social concerns, and provided cover for law-and-order crackdowns in the war on drugs. The stage was being set for our current opioid epidemic, as Purdue Pharma launched OxyContin, and federal regulators and the medical profession overlooked the dangers of flooding the market with opioids.

Panic about supposedly bad drugs warps our understanding of addiction. During the temperance movements of the 19th century, anti-alcohol preachers spun stories about how alcohol produced “pleasurable and painful vibrations” in the nerves of the stomach. The good drug / bad drug myth also enables blindness to supposedly good drugs. After World War II, during a postwar opioid epidemic, scientists became so focused on opioid withdrawal that they missed the dangers of a rising amphetamine epidemic (obscured by marketing from powerful pharmaceutical companies). The tail wags the dog; misguided ideas about dangerous drugs drive ideas about addiction, causing us to miss the full picture of potential benefits and harms.

“Misguided ideas about dangerous drugs drive ideas about addiction, causing us to miss the full picture of potential benefits and harms.”

5. We will not end addiction.

Addiction is part of us—it’s not a curable disease. But this is not to say there isn’t anything we can do, because there is. One of the key things is bringing addiction care into the mainstream.

Once I returned to my psychiatry residency and started to see my own patients, I did an intake interview with a young guy with alcohol problems, drinking about four to five drinks a night. His problems weren’t nearly as bad as my own had been, but my supervisor still said we had to turn him away from our clinic. And my supervisor was a compassionate, caring clinician. The issue is structural stigma—policies and practices that exclude people from opportunities to heal.

There are innumerable ways we can help alleviate the harms of addiction without waging a violent war against it. We must expand harm reduction efforts like safe consumption facilities, overdose prevention sites, syringe service programs, and other crucial services that reduce drug harms and provide an opportunity to connect with people. We must support all the different varieties of recovery, and support recovery as a long-term process.

All of these efforts need to be undergirded by the recognition that addiction is part of us. Beyond technocratic and structural changes, we need to change the way we think about addiction. Even as we discover treatments that might reduce cravings and support recovery, we still have to recognize the other personal and social elements of addiction. In other words, addiction is profoundly ordinary—just one manifestation of the central human task of working with suffering.

To listen to the audio version read by author Carl Erik Fisher, download the Next Big Idea App today: